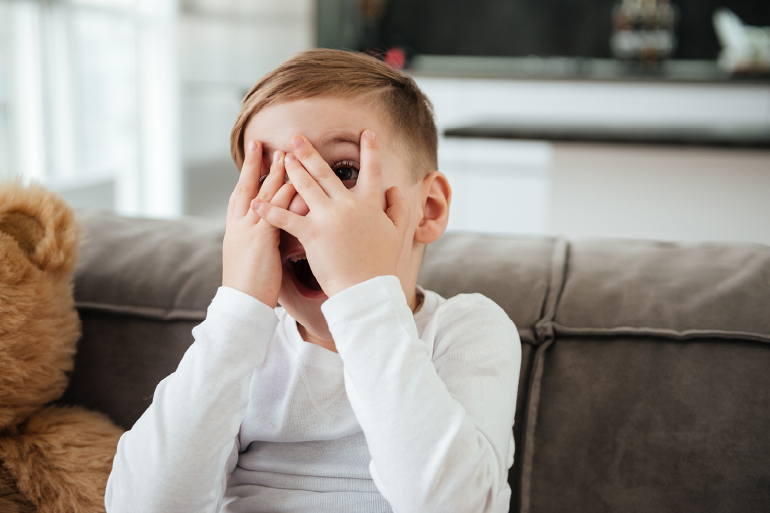 What is behaviour? Behaviour comprises everything we say and do. Let’s consider our daily lives… what are some behaviours we might do? Some examples include:

These are all behaviours that we may engage in, be it frequently or infrequently, which serve either a similar or different purpose (i.e. Referring to the examples shown above, some reasons may be…1. Feeling thirsty; 2. Avoiding the scary scene; 3. Wanting to watch a show; etc.). Rethinking things from our children’s point of view, they will behave either appropriately (i.e. using their words to request for items they want; raising their hand in the classroom environment to get their teacher’s attention; etc.) or inappropriately (i.e. grabbing / snatching things they want from their peers; hitting a sibling to get attention from their parents; etc.), based on their specific wants and needs.

In Applied Behaviour Analysis (ABA), we state that every behaviour emitted by our children, be it appropriate or inappropriate, has a rationale. The role of an ABA practitioner looks at analyzing how and why different children or individuals may behave a certain way (i.e. screaming; crying; grabbing items; etc.), in order to identify the reason why they behave so. By accurately identifying the reason why the child behaves inappropriately, ABA practitioners can teach the child a more appropriate behaviour to get their wants and needs without needing to engage in the inappropriate behaviour(s) they currently utilize.

As parents who interact with your children daily and know your them well, it is easy for you to quickly identify what your child wants or needs based on your experience (i.e. looking at something, making a certain sound, etc.). However, from a less familiar person’s perspective (i.e. school teacher, auntie, uncle, etc.), they will not be able to decipher what your child wants based on a subtle gaze, or sign that they make.  Should the less familiar person your child is attempting to interact with, be unable to understand your child’s actions or sounds, he or she will be unable to get what they want. This leads to your child feeling frustrated, and thus, increase the use of inappropriate behaviours in order to get what they want. Therefore, analyzing and figuring out the reason why inappropriate behaviour occurs is beneficial for parents, caregivers, and educators, to gain an understanding of how to teach and interact with your child, while allowing us to discover how to reward and increase more functional, desirable, and alternative behaviours your child engages in appropriately. When your child is well equipped with both the appropriate skills and behaviours to communicate their needs and wants, this reduces future frustrations and lead to happier children. In ABA, we categorize the reasons behind the behaviours as the functions of behaviour.

The Functions of Behaviour

In ABA, we tend to categorize the reasons behind behaviours under four different functions. These functions can be represented by the abbreviation SEAT and are mainly:

Prior to diving deeper into what the four functions stand for, let us imagine the simple relatable scenario of heading to the supermarket with your child. We will state what a typical supermarket trip looks like and how it relates to the four different functions of behaviour (i.e. SEAT).  This allows us to better understand how each different function of behaviour looks like in the same setting.

Looking at the first function of behaviour, what is sensory stimulation? Let’s look at the example of scratching to relieve an itch from a mosquito bite for instance. Think about the reasons why you would scratch the itch. The reason why we engage in the behaviour of scratching is that it provides sensory stimulation that relieves the itch, making the annoying feeling from the mosquito bite go away. Hence, when we state that child is engaging in a behaviour due to sensory stimulation, this occurs when one’s behaviour leads to either a good internal feeling or the removal of an unpleasant feeling for the child, teaching them to engage in the same behaviour for the good internal feeling or removal of an unpleasant feeling in future.

Now, let us think about a supermarket scenario. Imagine that you are at the supermarket with your child and he/she keeps going to the refrigerator to touch the cold glass doors, or the various chilled or frozen products. Should they keep doing this, there is a high likelihood that they like the cool sensation emitted whenever they touch the items. Another example of sensory stimulation may be when your child keeps looking at the lights constantly. In this case, they may enjoy the visual stimulation when this occurs.

Other examples of sensory stimulation include:

Looking at the second function of behaviour, some behaviours occur due to the urge to escape or avoid something unpleasant within the immediate environment of the child. When your child engages in behaviour with “escaping” as a function, they are getting away from an undesirable situation, activity, person, or anything that they do not like or do not want to do.

Other examples of escape behaviours include:

Thinking back to the supermarket scenario, let us try to identify some attention-seeking behaviours. Imagine that your child constantly shouts your name or suddenly starts crying out of the blue when you are talking on the phone, only stopping after you responded to him/ her. A separate example of attention seeking behaviours in the supermarket might be when the child names various food products and keeps looking back to get a response from you to indicate acknowledgement and feedback.

Other examples of attention-seeking behaviours:

The last function of behaviour is tangibles. Children often find themselves in situations where they want or need something such as food, toys or access to an activity or location. This last function is the direct opposite of the escape function. Instead of wishing to remove themselves from an aversive situation, the child would emit behaviours in order to gain access to a preferred item or activity instead. This may be getting their favorite candy, getting to jump on the trampoline, or getting their favorite person to sit with them.

Thinking back to the supermarket scenario, have you ever experienced your child pulling at you, lying on the floor, stomping their feet, and either gesturing or yelling “chocolate, chocolate!” while you are queuing to checkout at the cashier? Should this behaviour tend to result in them getting their favorite snack in order to calm them down, the behaviour would be emitted due to getting access to the snack. Another example of this function is when your child throws a tantrum in order to be placed on the child seat of the supermarket trolley. Should they gain access to the child seat, that emitted behaviour has the function of gaining access to the preferred activity of sitting on the child seat of the trolley.

After understanding the four functions of behaviour, what are some ways in which ABA practitioners and yourself be able to identify the function of your child’s behaviour? It can be challenging to determine the function of the behaviour as your child may emit identical inappropriate behaviours (i.e. throwing tantrums, crying, etc) for multiple functions (i.e. thowing a tantrum to escape the work given, to get attention from others, or to get a desired item). When working with behaviours, our ABA practitioners use the “A-B-C” contingency strategy to determine the functions of the child’s behaviour.

What is A-B-C contingency?

“A” stands for “Antecedent”. This refers to the events that occurred immediately before the target behaviour

“B” stands for “Behaviour”. This refers to the observable, measurable action of the child.

“C” stands for the “Consequence”. This refers to the events that occurred after the behaviour occurred.

Adam is playing his favorite train set in the living room. Shortly after, his sister, Fiona, took one of his trains away to play. Adam noticed that his sister was taking his train and started to scream. This was followed by hitting his sister, who in turn, dropped the train. Adam then took back the dropped train and continued playing with the train set.

In the above scenario, what do you think the antecedent, behaviour, and consequence are?

Consequence – “Adam gets his train back” Based on the above example, the antecedent for the behaviour is that Fiona took Adam’s train away (i.e. loss of access of the train), and when he got back his train, Adam stopped the screaming and hitting. Hence, the function of Adam’s behaviour is most probably to “gain access” to his toy train.

It is important to identify the functions of your child’s behaviour in order to formulate an effective strategy to reduce undesirable behaviours. However, at Dynamics Behaviour Analysis, we believe that children may also act or behave in an inappropriate manner (i.e. hitting, scratching, biting, etc.) due to an unpleasant feeling, caused by different internal conditions that cannot be seen with the naked eye (i.e. migraines; ear infections; toothache; etc.). As such, it is important to ensure that medical factors have been ruled out prior to beginning any behaviour intervention plans.

The dedicated and highly qualified ABA professionals at Dynamics Behaviour Analysis have extensive experience in treating children and adults from different countries and have been trained and worked with some of the best in ABA.

We are committed to using best practices and research-based intervention strategies and procedures, providing personalized and data-driven programs and care, and partnering with parents and caregivers to help every child unlock their full potential, gain a positive learning experience and achieve their goals.

To provide holistic support, we also work hand-in-hand with trained professionals who are part of  Dynamics Therapy Group’s multidisciplinary team, such as Occupational Therapists, Speech Therapists, Physiotherapists, Counsellors, Educational Therapists, and more. Having these essential services under one roof has enabled our ABA professionals to ensure a seamless and hassle-free collaboration throughout the child’s program.