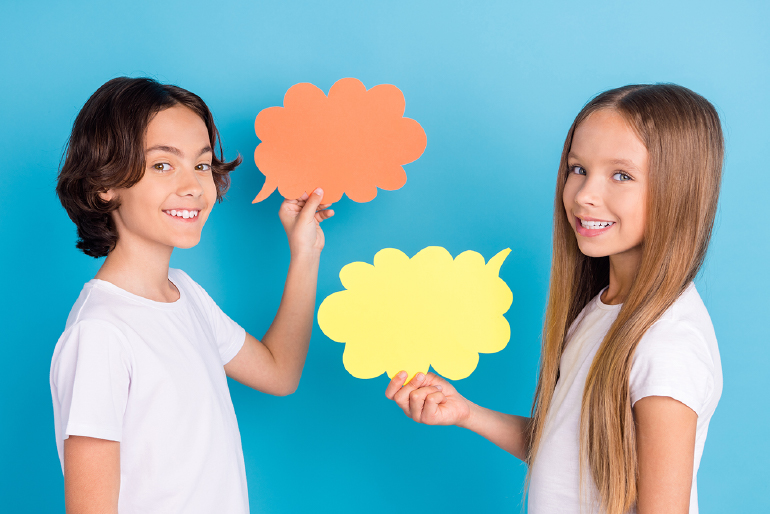 Bilingualism refers to the ability to use two languages in everyday life. In our multilingual society, it is not uncommon for children to grow up in an environment where they are exposed to more than one language in their daily lives. Some children may be exposed to more than one language at an early age and develop into bilingual speakers as they age.

Bilingual children switch between two different language systems for communication in their daily lives. This stimulates their brain resulting in a more active and flexible brain. Research has shown that bilingual children when compared to their monolingual peers have an easier time in:

In our multicultural society, bilingualism helps a child to maintain strong ties with their family, culture and community. All of these environments shape a child’s identity and are key parts in developing socially and emotionally. Being bilingual also helps children to make new friends and form stronger relationships using both languages which is key in our diverse society. According to Kovács and Mehler (2009), babies raised in bilingual households show better self-control which is a key indicator of school success in the future.

School readiness and success for bilingual children is tied directly to mastery of their first language (Zelasko & Antunez, 2000). There are academic benefits for bilingual children due to their knowledge of more than one language. Bilingual children are able to think more creatively or develop more flexible approaches in problem solving.  The ability to read and think in two languages promotes higher levels or abstract thinking which is important in learning (Diaz, 1985).

How do children learn more than one language?

There are two main ways for bilingual acquisition in children:

Simultaneous Acquisition occurs when a child is raised bilingually from birth, or when the second language is introduced before the age of three (Paradis, Genesee & Crago, 2011). The developmental stages for language acquisition do not differ between monolingual children and bilingual children who learn two languages simultaneously. Even though bilingual children may start talking slightly later compared to their monolingual peers, bilingual children still begin talking within their communicative milestones. (Meisel, 2004). Bilingual children learn to acquire both languages early on in their language development (Paradis, Genesee & Crago, 2011). At an early age, they are able to differentiate between their two languages and show the ability to switch between languages according to their conversation partner (e.g. speak Mandarin to a Mandarin speaking parent, then switch to English with an English speaking parent) (Genesee & Nicoladis, 2006).

A child who learns his second language through sequential acquisition generally develops in the following way (Paradis, Genesee & Crago, 2011):

Are bilingual children more likely to have language difficulties, delays, or disorders?

Is my child bilingual even though he is not equally proficient in both languages?

Most bilinguals have a “dominant language” which they are more proficient at. It is typical for bilingual children to have one language they are “stronger” at. Each language does not have to be at the same proficiency.

Is it best for each parent to speak only one language with a bilingual child?

The “one-person-one-language” strategy may be used by some parents where each parent speaks a different language to the child. Research have shown that this approach is neither necessary nor sufficient to raise a child bilingually and that it has shown to be effective and ineffective in acquisition of both languages. (Barron-Hauwaert, 2004). Hence, parents should speak to their child in a way that is comfortable and natural to them. The best approach is to use whatever strategy that promotes high-quality and high quantity exposure to both languages.

Is earlier better when teaching children to be bilingual?

The concept of a “critical period” for language acquisition suggests that there is a window of time (early childhood) during which a second language is most easily learned. This theory has led to many parents believing that it is better to learn a second language as a young child. Research on bilingualism and second language acquisition has converged on one stand that “earlier is better” (Hakuta, Bialystok & Wiley, 2003). Young children have been found to achieve better native-like pronunciation compared to older children or adult second language learners. There is also an incremental decline in language learning abilities with age according to Birdsong and Molis (2001). However, other research has challenged the idea of a critical period with research showing that older children who learn “Academic” language can have an easier time learning a second language due to more advanced cognitive skills and more experience with schooling and literacy (Paradis, Genesee & Crago, 2011).

A bilingual clinician will assess the child’s language skills in both languages to determine the child’s entire language profile. This includes the following:

How to support your bilingual child

Birdsong D, Molis M. On the evidence for maturational constraints in second-language acquisition. Journal of Memory and Language. 2001;44(2):235–249.